I’ve been thinking about my Self lately; mostly about how to reconcile the beauty and freedom of selflessness with the necessity of maintaining a healthy self-image to deal with the pressures of everyday reality. Looking to both positions seems kind of contradictory.  On the one hand, releasing attachment to the self opens awareness to full realization of the here and know in all its complexity. And, although not all one experiences is of a positive nature, un-attachment makes it possible to maintain perspective, to reach a reasonable understanding, without creating a “story line” in which “I” am the protagonist.

On the other hand, I am led to believe that without a healthy, confident self I probably won’t fare too well out in the world, socially speaking. The meek may inherit the earth, so it’s said, but in the meantime one should expect some serious bullying.  I suppose, maybe, like much else, the problem may just be a matter of degree. Perhaps the self is nothing more than the subject of the perceptions, emotions and thoughts we experience rather than the independently existent entity that leads to narcissism and tunnel vision.

As nice as it would be, intellectually (and emotionally, too), to be absolutely sure one direction is better than the other, I guess I must be content with attempting to balance the ideas. It just goes to show, I suppose, living an examined life takes some work. 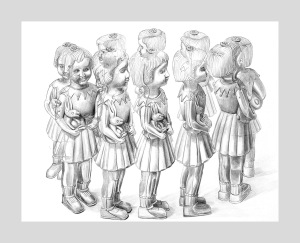