I got to talking to a presuppositional apologist the other day. He assured me everyone knows God exists whether they realize it or not, God being the source of all our knowledge.
I told him that I was presently seeking God and had a number of good candidates but wasn’t absolutely sure I had found the right one and was really questioning the idea of an entity with all the omni’s in tow.

He said that since I already knew that the one true God (specifically, the Christian God of the Bible) existed I was just obscuring that realization by pretending to seek; I was suppressing the knowledge of God; I was being unrighteous. He said God was behind my ability to reason and think logically, that there was only one true world view and that was the Christian one and said, once again, that I knew all of this was true.

Not being aware that I knew something of which I was unaware, I told him that now, since he’s explained to me that I do know these things that I didn’t know I knew that perhaps there were other things I knew that I didn’t know I knew. And, supposing these things to be outside of the empirical realm, maybe I knew when I felt particularly safe and secure that there were invisible protector beings keeping me safe or that my dreams weren’t just dreams but were a parallel reality visited in my sleep or, maybe, I didn’t know that I knew all along that I am God herself creator and maintainer of my world.

I think the presuppositional apologist thought I was truly an unrighteous individual suppressing the truth that he and I knew it to be and went away believing I was a lost soul. But, I must admit I kind of like the idea of maybe knowing things I don’t know.

Sister Chloe was enlightening me the other day about what to expect when the end times descend upon us.  At some point, she said, the quick and the dead, provided they are/were true believers, will be raptured heavenward to live for eternity in paradise.

I got to wondering what ‘paradise’ might consist of; is the weather always temperate, the days sunny?  Will the food be exceptional?  Is exercise part of the equation even though it can be a bit painful sometimes?

Anyway, I was reading this book, The Leftovers, about these folks who didn’t get raptured so were left to their daily grinds.  Well, the question that immediately arose after the rapture was why them and not us. It seemed that some of those folks raptured didn’t appear to have led all that great of a life in moral terms and some of those left had been fairly devout church goers.  It was a real conundrum which led to the development of an extremist cult aimed at dealing with the leftovers’ apparent rejection.

Sister Chloe seems to think if I follow my conscience and try to always do the right thing I’ll be just fine-will have nothing to worry about when the Rapture happens.  She’s so compassionate; naïve but compassionate. 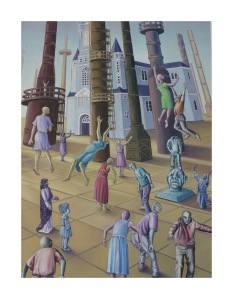 I’ve been reading about climate change lately.  I’ve been trying to make sense of the number discrepancies and the diametrically opposing views about a subject that seems as if it should be pretty straight forward.

Some people are convinced the carbon dioxide emissions being spewed from autos and power plants worldwide is collecting in the atmosphere and causing, among other things, the ice caps to melt.  Others are convinced global temperature fluctuations are just a normal cyclical occurrence.

Both sides site their opposing statistics and their scientific experts but, it seems to me, for a lot of people the issue boils down to an emotional, us versus them scenario with an almost religious fervor.  Sometimes the issue seems reduced to name calling and ad hominem attacks just like it used to be on the playground in elementary school.

Skeptics think of proponents as tree-hugging alarmists just looking for another world threatening crisis; proponents think of skeptics as anti-intellectual luddites with their heads buried in the sand.

Well, whether or not human-caused global warming is as dire as some claim it seems to me we could all do a little more to reduce our carbon footprints and ease the pressure on Mother Earth. 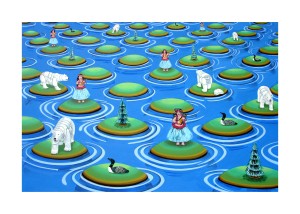 Friends and I were sitting around the other day chatting over afternoon tea. Sister Chloe got into talking about the providential nature of her life: How God had seen fit to bless her with strong, supportive parents who had taught her right from wrong, follow the Golden Rule, do no harm and help others when possible and to follow the path that God had laid out for her.  She acknowledged God’s ways were sometimes mysterious and were not always easy to understand, like when her brother was left on the driveway behind the family car and subsequently ended up looking like Flat Stanley.  She questioned how God could let that happen but said she believes he must have had his reasons as he does for everything.

Well, Lala then proceeded to offer that she saw her life in quite different terms.  Fortune, she said, had been kind to her.  Following a particularly potent incantation her father had won the favors of a Toys-R-Us manager and ended up being featured in a toy exhibit which enabled him to secure a fine home for the family.  Even though the family had had their share of bad occurrences, mother having been purchased by a quite rowdy child and very likely ended up moldering in a damp basement her stuffing infested with centipedes and spiders,  cosmic justice had, for the most part, shined upon her and she hoped the stars would continue to do so.  She showed us an amulet she was wearing that came from her ancient ancestors.  She felt sure this would continue to protect her through the travails of life.

Then it was my turn.  I told them that my father was fond of telling us when difficulties arose that there was no reason to fear unpleasantness or worry about things because what would be would be and we had the freedom to make choices in our lives that would lead us, in all probability, provided they were wise choices, to a content and happy life.  I told them this advice had worked out pretty well, that I’ve always done well in school, able to overlook the prejudices of my human classmates and even the potentially devastating event of my aunt being lost in a family move (I think the dog carried her off and buried her somewhere) was met by us all with stoic acceptance.  I said that I was content in my ability to choose and felt comfortable letting each day unfold as it will.

Sister Chloe asked me how I can go about without faith in the existence of a benevolent overseer.  Lala asked Chloe how she could possibly believe her ‘Superman in the sky’ could care about the events in her life.  I asked how either of them could attribute future occurrences to the Supernatural.

As I poured our second cup of tea we all agreed it was time to change the subject.  We decided to talk about the weather. 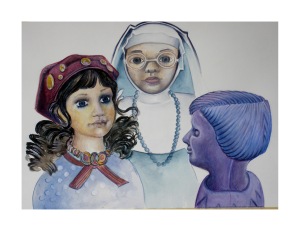 Boy, it’s really hard to know what to believe these days.  I read in a news magazine my hero, Mr. Rogers, was a former Navy Seal with twenty five confirmed sniper kills during the war in Viet Nam; truly mind-boggling.  But, then I went on line looking for details and found out that the story wasn’t true, that it was just an urban legend.

My friend said I should have faith that some things are true, that belief is truth to the believer. I guess people with a strong religious faith believe God is truth and that when they’re in doubt they can ask God to direct them, which means they have a way of communicating with a supernatural entity.  I don’t doubt their sincerity but judging from the variety of interpretations different people have for the Biblical texts I wonder if they’re all talking to the same Being.