I’ve been reading about certain 19th Century philosophers, William James and John Dewey among them, who developed a philosophic procedure, pragmatism, to deal with the disconnect between the growing validity of scientific discoveries and long held religious conceptions many folks embraced at the time.

Pragmatism was, and still is I guess, about practicality. Acting on an idea, empirical or religious, will produce either a result that proves to be personally useful, one of practical applicability, or will prove itself useless and disposable. The ‘truthfulness’ of the idea is thus established.

I guess it’s pretty clear that being practical, you know, for the most part, is important in decision making regarding social functioning and earning a living. It seems to me important, though, to hang on to idealisms sometimes no matter how trivial or fantastical they may be. Imaginings need to be limitless and be free to reach beyond any notion of functionality.

James and Dewey realized we live in a steadily evolving, transformational world. We need to spend time seeking the unknown in all its potential absurdness. Who knows, such investigations may lead to useful insights that will counter unwanted future evils. 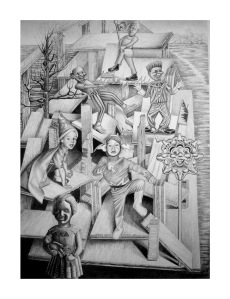